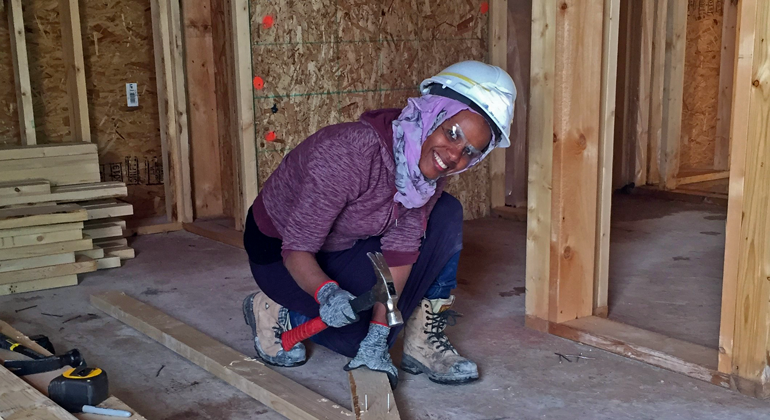 Life is busy. There’s no denying it. Every day it feels like it gets more complicated and the rollercoaster doesn’t stop.

But what if we told you that if you set a goal, you can achieve it? That there is a way you can improve your life in a tangible way?

It won’t be easy. In fact, it will take 500 hours of volunteering, but the reward will be great and it will last more than a lifetime.

Invest your time and you can achieve your dream of owning a home – you might even learn new skills and make life-changing friends along the way.

After Habitat homeowners are approved to buy a home, they volunteer 500 hours. More than 300 families in Southern Alberta have accomplished this.

How do we know that you can do it? Because Jesse and Zufan did it too.

Jesse is a loving husband to Sarah and proud parent to Wesley, Jackson and Annabel.

Jesse and Sarah had a goal of owning their own home, but saving for a down payment was starting to become out of reach for their young family.

Jesse and Sarah worked hard at paying off their student loans before starting their family.

With three little ones, however, they found themselves putting off the idea of owning a home as saving for a down payment became more and more difficult.

They were settled and renting in Montgomery, a community in Northwest Calgary, when they found out that their rental would only be available for one more year.

They started looking at other housing in the area and soon realized they would have to move away from their neighbourhood. It wasn’t affordable anymore.

That meant moving away from their family, changing the kids’ schools, and moving further away from work.

After a friend encouraged them to look into Habitat for Humanity, they began to find new hope. Habitat had affordable homes for sale in Bowness – just a few blocks away from where they were renting.

And they wouldn’t be renting this time, they’d be homeowners. 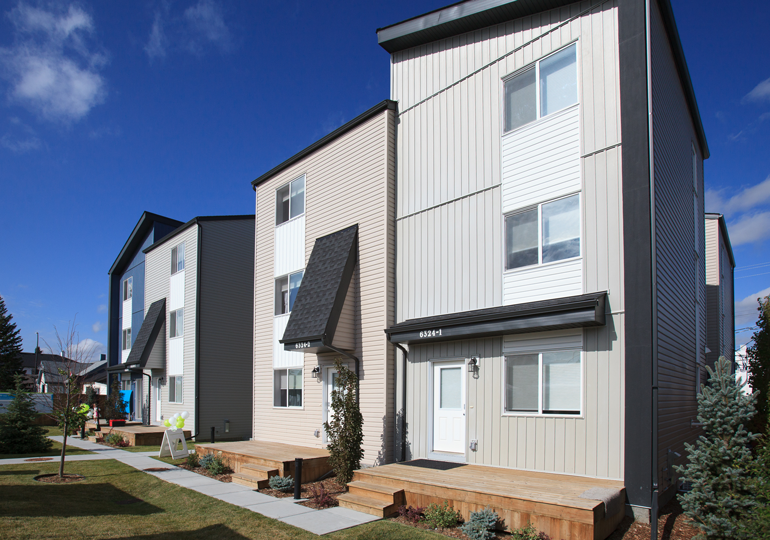 Jesse and Sarah found out that Habitat had affordable homes for sale just a few block away from where they were renting.

When they were approved to buy a home through Habitat, they knew that they were committing to 500 volunteer hours. For Jesse, it was actually “kind of appealing.”

“That first day for sure was pretty welcoming. It was a really nice environment,” he said. “They’re asking you what you want to learn or what you want to help with that day. And that was great.”

Over time, Jesse found himself enjoying the work so much that he actually started to feel guilty. “There’s this mentality of sweat equity that it would be laboursome,” he said.

“But after a few shifts, I realized that it’s okay for me to enjoy it and actually like it. When I’m no longer required to do this, I really hope I continue volunteering. It’s a nice way to spend your time.” 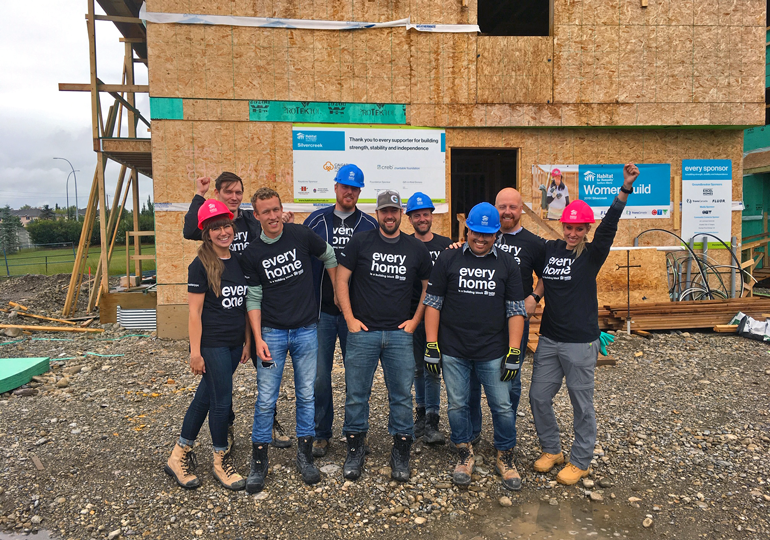 One of the things that stood out to Jesse when he was volunteering was the number of people from the community who were also giving their time. He found it "really inspiring."

It was a big commitment that Jesse described as “almost like having a part-time job.”

“But it was easy to manage because it’s obvious what the payoff was,” he added.

Sarah tackled a bunch of the hours through the online courses, and Jesse’s parents helped out too. They did several shifts at the South Calgary ReStore and enjoyed it so much, they even thought about getting part-time jobs there!

Sarah and Jesse moved into their Habitat home in Bowness on July 29. It felt like the hottest day of the year. 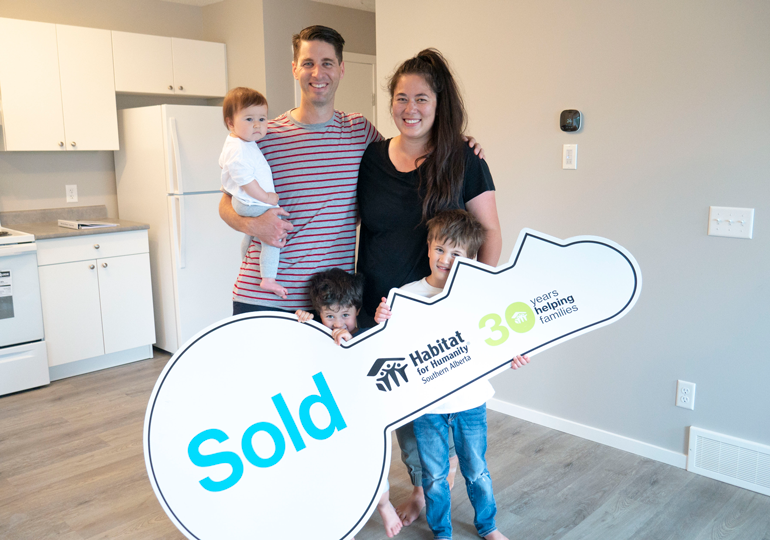 Jesse, Sarah and their three kids moved into their home in Bowness at the end of July.
The location is "perfect for their family."

Jesse was able to use some of the skills he picked up on the construction site in his new home right away.

“We did a ton of drywall at Silver Springs. So moving into my own house, I was able to do the drywall in the basement pretty quickly just from seeing it happen and then transferring the skill. People pay money to go take an evening class and learn the same things.”

When asked how he felt when he finished his very last shift, Jesse had an unexpected reply.

“I wouldn’t be in a home if there weren’t volunteers,” he said. “So it was cool to think that now I can join these other people who are also not obligated, but are coming here on their own.”

Zufan is a hard-working mother to Abdul-Razzaq, and proud fur-mom to Rahma, the family cat.

This family of three spent years renting – first in a high-rise in downtown Calgary, then in a one-bedroom basement suite.

Thinking about moving to a bigger place “was a nightmare” for Zufan because of the unstable market. She didn’t want to risk having to move because of landlords or rent increases.

When Zufan was approved to buy a Habitat home in Silver Springs, she was “just so happy.” 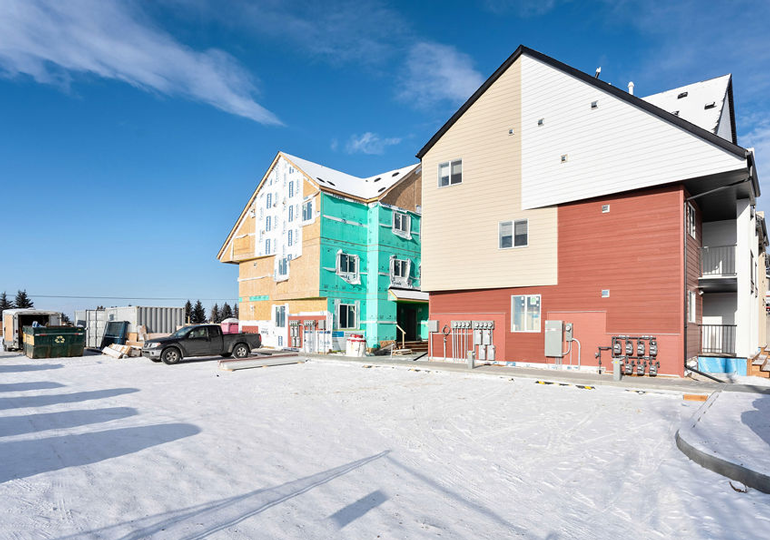 Zufan was approved to purchase one of Habitat's 32 townhomes in the northwest community of Silver Springs.

She never viewed the volunteer hours as a barrier, because she knew they were helping her achieve her dream of owning a home.

That was the only motivation she needed.

“The time goes and the energy comes,” she said simply.

After Zufan was approved, she called her friends one-by-one and asked them if they would help her complete the hours. They happily agreed. “My friends are my family,” she said. “They were really happy to help.”

Over the next five months, Zufan and her friends completed her 500 hours.

She spent most of her weekends volunteering on the construction sites and at the Calgary ReStores. She was even able to use some of her vacation time from work to get them done even faster.

Zufan and her friends spent many Saturdays volunteering at the Calgary ReStores.

Unlike Jesse, Zufan had never been on a construction site before. “It was funny because I didn’t have any idea and I hadn’t used any tools before, but I tried,” she said.

Thanks to everyone on site, she felt safe and comfortable using the tools. “The first day was really nice. I wasn’t expecting that. And they were so fun.” 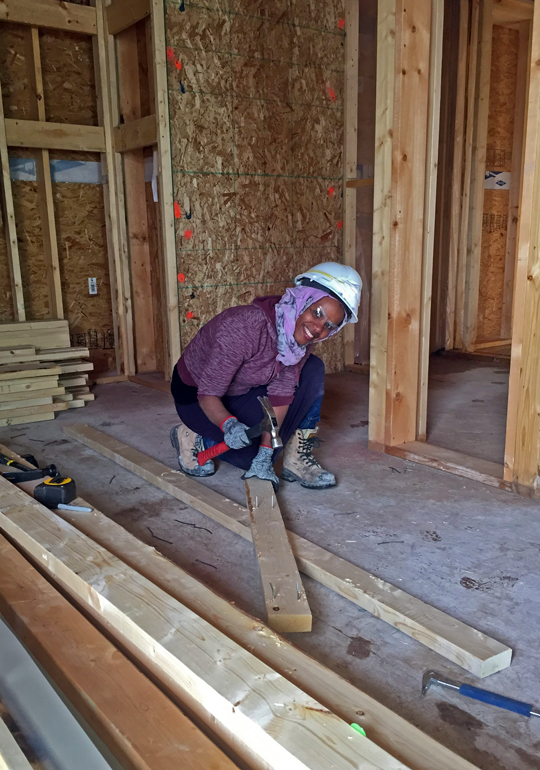 Zufan had never been on a construction site before, but she found it safe and
welcoming and enjoyed working with the staff and other volunteers.

Zufan found the people the most enjoyable part of her volunteer experience.

“I really liked it, not just because of my house, but because of the people there. When they would talk to each other even, it would just make me laugh.”

Living in Silver Springs while the other buildings are under construction means Zufan still gets to see the people she volunteered with. “I just loved it. I really admire them. I would come back for them,” she said.

Before Zufan moved into her home, she was looking forward to that special “tomorrow.”

She described it as “the day that I’m going to be the owner of the house I have always wished to have. ‘Tomorrow,’ I’ll be a proud mom who can provide the most needed thing for her family, with the help of Habitat for Humanity Southern Alberta.”

Well, that “tomorrow” is finally here and today, Zufan is a proud Habitat homeowner in Silver Springs.

Zufan and her son Abdul officially took possession of their home in February.

“Everything is like a dream,” she said. “I was crying all the time. When I go back in the house, I cry. When I come out, I cry.”

Jesse and Zufan are just two of more than 300 families who have purchased a home through Habitat for Humanity. They've turned an investment of time into an investment in their families’ futures.

Are you ready for your own special tomorrow?

It may sound like a lot of work, but like Zufan said, “Don’t lose out because you are scared to do that. No, if you want to do it, you can do it.”

Take the next step into buying a home through Habitat for Humanity today.