Azeb immigrated to Canada after spending seven years in a Kenyan refugee camp. Her brother lived in Calgary and she was grateful for the opportunity to be reunited, but life in a new city became steadily more difficult for Azeb as a single mother looking to establish a stable foundation for her daughter, Sipran. 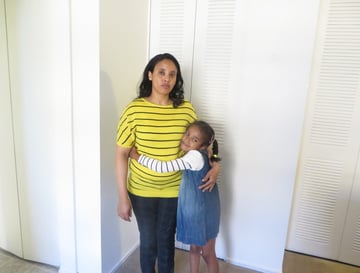 Azeb and her daughter, Sipran.

More than 40 per cent of Azeb’s income has been going towards rent for one-bedroom apartment. Because of this, she’s been unable to save for a permanent home for Sipran, and she fears for her daughter’s safety when she plays in their current neighbourhood.

Despite the challenges facing Azeb, she refuses to give up hope. She works tirelessly to earn a living and support Sipran’s education. Her drive and desire to provide the best for her daughter’s future brought her to Habitat for Humanity.

Azeb and Sipran are matched to a new home in Pineridge, Calgary. Azeb has spent more than 500 hours volunteering with Habitat and is prepared and excited to take on the responsibilities of becoming a new homeowner.