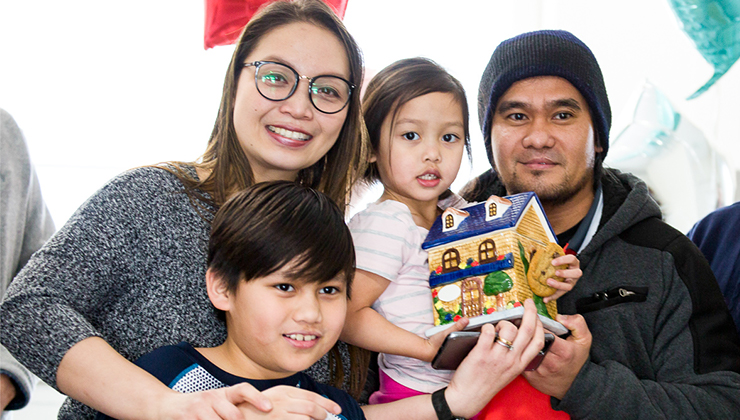 “We have friends who have told us we are lucky like we’ve won the lottery, but being lucky only lasts for a moment,” Avon says. "Instead, we feel blessed to own this home, and this feeling lasts a lifetime.”

Every weekend, Avon and Romano’s home is anything but quiet. You can find them eating together, singing karaoke or playing bingo or other games. The stakes in their games are high, as Avon makes sure there are enticing incentives for her son Lorenzo and daughter Marian to win.

Each week, she checks Kijiji and pours over Facebook Marketplace for inexpensive but interesting items her kids would be excited about. If she can’t find anything online, the prizes get a little more creative. Pancakes and mac and cheese are Lorenzo’s favourites and Marian has her own special snacks too.

If they win the game, the kids can receive their ribbon-tied spoils that evening. Avon puts a lot of thought into making these moments special. 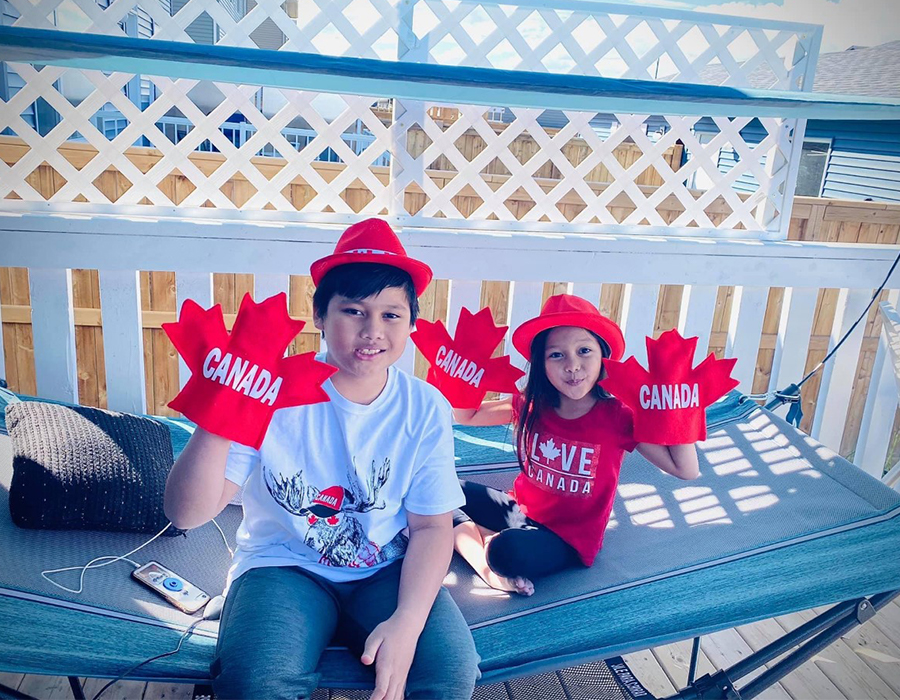 Lorenzo and Marian in the backyard of their Habitat home

“We just want to make it up to the kids and be a family. We missed a lot of their growing years and milestones,” Avon says.

They had to make some sacrifices along the way

Eight years ago, Avon and Romano were working abroad in Dubai. They knew Dubai wasn’t the place to raise their family. Instead, they had Canada on their vision board. “It is one of the best places in the world.”

So they decided Romano would set out for Canada to find a better life for his family. Avon stayed behind with their three-year-old son Lorenzo and soon after gave birth to their daughter, Marian. Romano rented a single room and saved as much as he could for the arrival of his family.

After three years of being apart, Avon moved to Canada with Lorenzo, to work on their Permanent Residency. Their daughter, Marian stayed behind with her grandparents as they worked and waited for more certainty of their life in Canada. 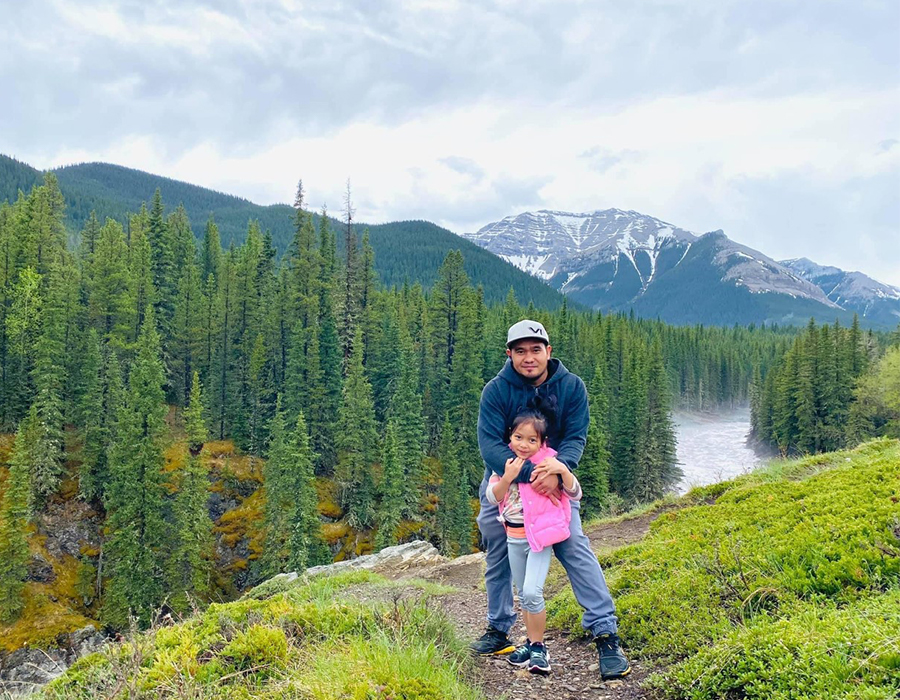 Romano and Marian on a family outting

In 2017, the family was approved for Permanent Residency and after all their “struggles and tears shed,” Marian was reunited with her parents, and met her dad for the first time.  It was “one of our family’s happiest moments.”

Their housing made their daughter sick

After Marian arrived, they were now “a complete family.” However, it soon became clear to Romano and Avon that their housing was not suitable for their daughter.

Marian had bilateral pneumonia. Above their two-bedroom basement suite in Okotoks, lived another family that often smoked inside the house.

Because of their shared ventilation system, Marian’s lungs were often irritated and she couldn’t go to school. At the time, Romano was working as a food service supervisor and Avon as a sales associate in a local gift shop.

“When she was sick, I couldn’t go to work.” She describes it as a very stressful time for a family that lives paycheque to paycheque.

“I want to tell Habitat for Humanity, its partners, and everyone who helped out that they've had a great impact on our family.”

Their rental also had poor insulation. “Winter nights were so cold there that our entry door knob would freeze.” They suspected their suite hadn’t been properly insulated.

“Romano said to me, ‘if you try find cheaper housing then we’ll have the same conditions we are having now.’” Then their landlord increased their rent.

Still, Avon kept searching until one day she stumbled upon something unexpected. “I don’t know why I went and typed in ‘affordable housing.’” Avon found a Habitat advertisement on Kijiji and their journey to home ownership began.

They found an organization “that cared about families like them”

Avon and Romano didn’t know much about Habitat, but they decided to give it a shot. They drove to Calgary for an information session and realized there was a Habitat build happening right in Okotoks. All these years later, Avon remembers that day, April 12th, 2018, and even has her Eventbrite confirmation email saved. 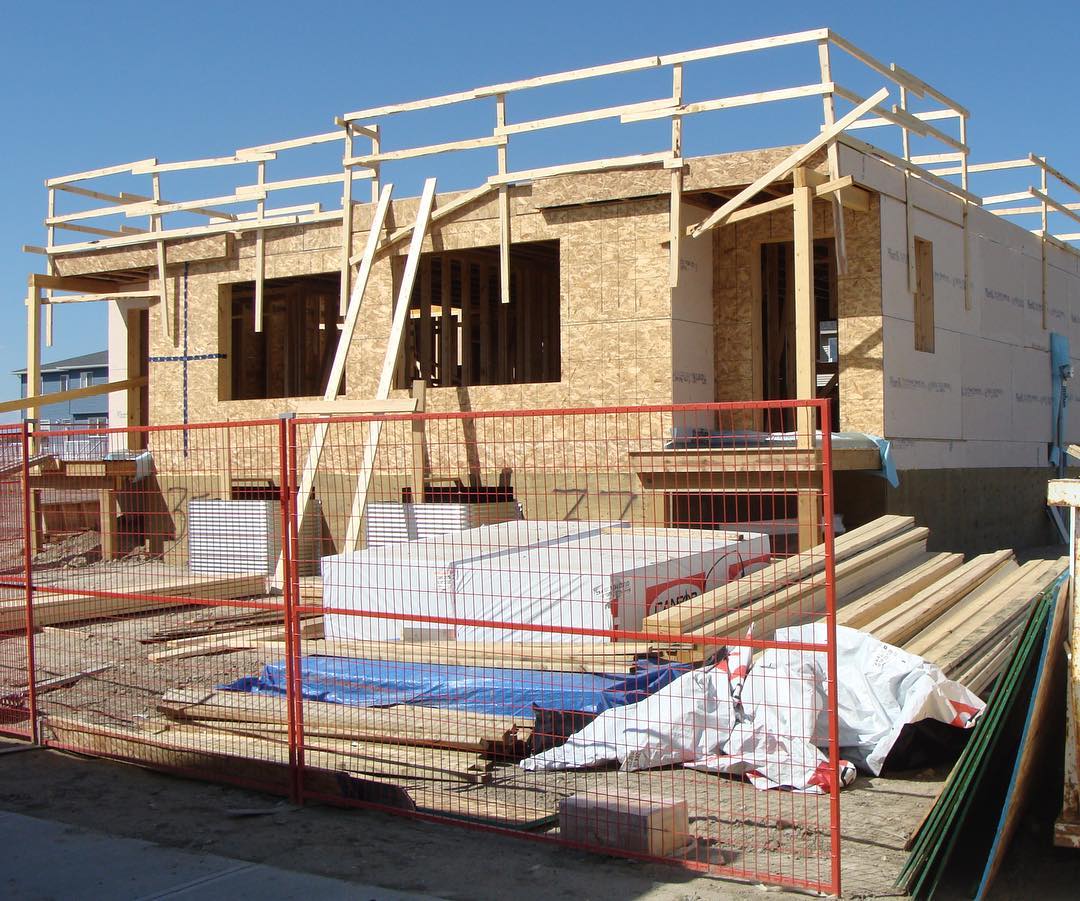 They collected their documents and applied to buy a home through Habitat for Humanity. Avon remembers from the very beginning, before they had been approved, they would drive past the construction site and Lorenzo and Marian would say, “our home will be built there.”

“It’s like they were claiming their home. The prayer of an innocent child is very powerful,” Avon says.

On January 18, 2019, this family of four moved for the last time. It was a beautiful day for them, despite winter storm conditions. “The cold didn’t even bother us.” Avon remembers the kids being very responsible with their part in the move. The family, in all their excitement, even forgot to have lunch.

Finally, they were home. In Marian’s words, it “was their castle where they would live happily ever after.” 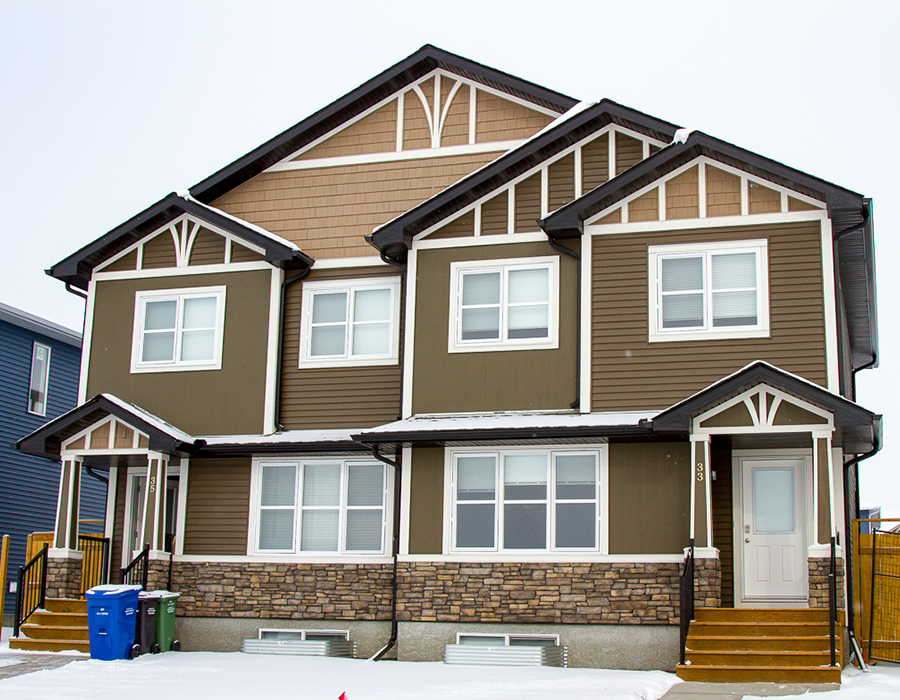 Regional volunteer committee members gave their time and energy to raise awareness and funds for the homes as well as working with local families.

Their future is strong and stable

Now, pnemonia is a distant memory for Marian. Her lungs are healthy and she is thriving. As a family, they enjoy having their friends over, turning up their music, singing and playing games loudly, as well as decorating. These are precious freedoms they couldn’t enjoy in their previous rental homes.

A very special memory is when they had their house warming party on July 29th, 2019. It was Lorenzo’s 9th birthday.

For the first time, they could invite all their friends over, because they weren’t limited by their home’s size. There were friends in the living room, kitchen, basement and backyard. “It was a dream come true, all thanks to Habitat for Humanity.” 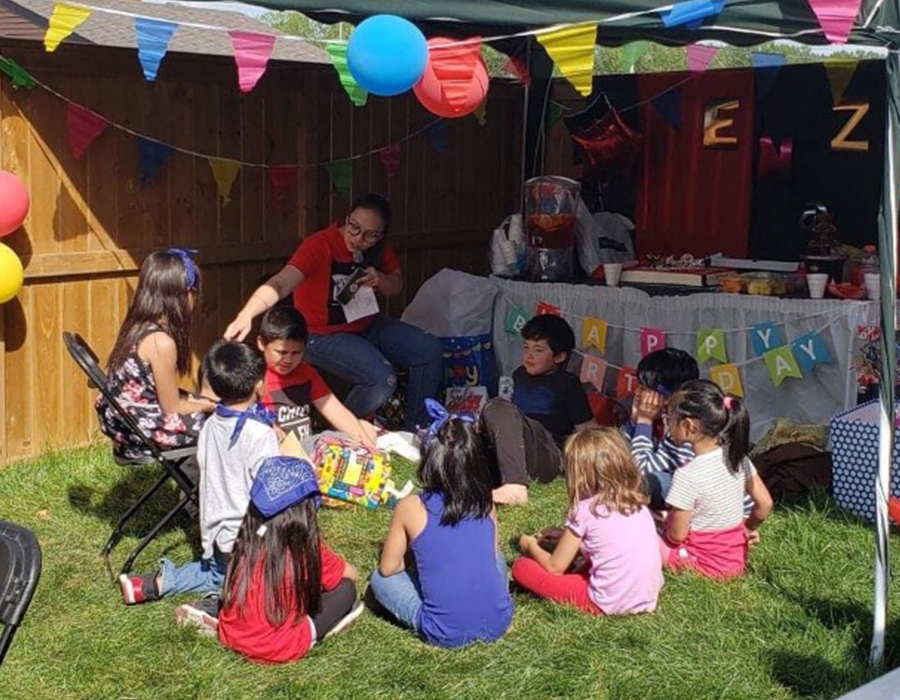 As well as celebrating Lorenzo's birthday, Avon and Romano invited a priest to bless the home.

The kids loved it too. “They say, ‘Mom can I have another birthday party?’”

Because their monthly mortgage payments are customized to their income, they have been able to carefully build their future. Avon is taking an online course in Accounting and Payroll Administration. She will finish this summer and her hope is to find a well-paid and stable job.

Balancing her receptionist work, responsibilities as a mother and course work hasn’t been easy. But she keeps a strict schedule so that she can protect Saturdays and Sundays for her kids.

“We keep those two days for the children. Even if I go to sleep at 1 AM or 2 AM on Friday.”

When Avon is finished her studies, Romano will consider his next steps too. Ultimately, their goal is to work, study and save so that their children have the freedom to study without the stress of finances.

One step at a time, they are building a beautiful future for their family. “To have a home to build our future in, that is the best feeling.” 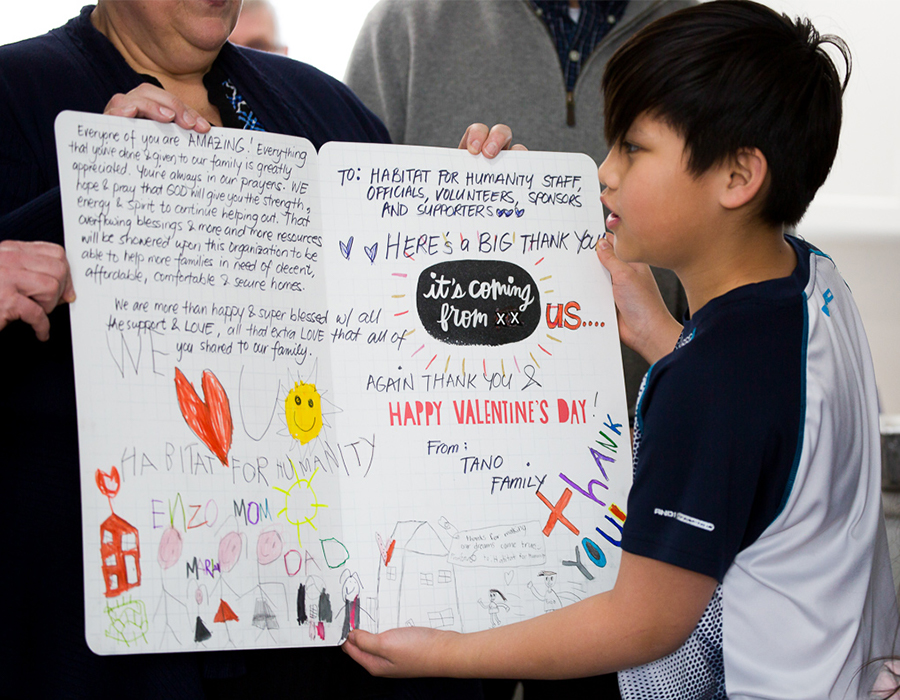 Lorenzo presenting a card to Habitat supporters at the Okotoks Home Dedication in February, 2019.

“I want to tell Habitat for Humanity, its partners, and everyone who helped out that they've had a great impact on our family.”

“It's great to think that they care for families like us. Because of the affordable mortgage, our family is strengthened and we look positively to our future.”