every faithcan be put into action

One of the key challenges for clergy is finding new and impactful ways to engage their congregations in acts of loving-kindness and compassion.

So many needs and crises compete for our attention and resources daily that we can easily become overwhelmed. However, providing a safe and affordable home can literally change a person or a family’s world.

The Interfaith Build Project in support of Habitat for Humanity is a unique opportunity for clergy from all faith communities to come together to put their faith into action and help build stability and independence for Calgary families in need of affordable housing.

It is also a powerful statement to the citizens and leaders of Calgary that cooperation among leaders of diverse faiths results in good work that benefits everyone and sets a tone of good will that can be modeled in other arenas of public dialogue and action.

Through our collective effort, we can have a dramatic, positive, and permanent impact upon families who in turn can achieve strength, stability, and independence through home ownership.

Goals and accomplishments to date

The goal of the Interfaith Build Project is to raise $1 million to build 10 units of housing in Calgary and other parts of Southern Alberta. The Calgary communities of Pineridge, Bowness and Silvercreek are the locations of the initial Interfaith Build sites for 2017.

To date, we have received contributions of $833,000. The Anglican Diocese has pledged to raise $200,000 and we have received a generous gift of $100,000 from Sam Switzer as part of the Beth Tzedec’s Interfaith Build Campaign. In addition to these funds, the Roman Catholic Diocese of Calgary has pledged $300,000 over two years. 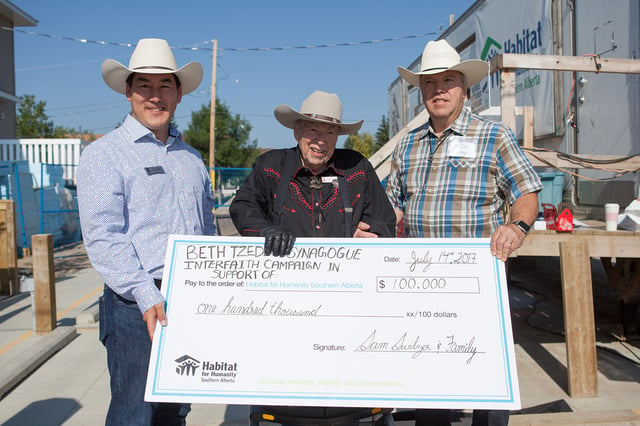 Bishop William McGrattan of the Roman Catholic Diocese of Calgary, as part of the Interfaith Build Project, has made a generous donation to Habitat for Humanity over two years (2017 and 2018). The first installment was in 2017 and the second will come in 2018.

These generous contributions will help fund three developments in Calgary - Bowness, Pineridge and Silver Creek - as well as builds in Medicine Hat and Okotoks.

Learn more about many opportunities for you to get involved with the Roman Catholic Diocese of Calgary's ongoing support for Habitat for Humanity.

How you can get involved

Continuing the work that began last summer, multiple Calgary faith communities will put their faith into action by joining together to help build stability and independence for families in the Calgary area through Habitat for Humanity.

Participants are encouraged to fundraise, building on the funds raised to date. Then, Habitat for Humanity will put those funds to work on the construction of affordable Habitat homes in the communities of Pineridge and Bowness. Please feel free to fill out the form and we are happy to provide advice and resources.

Along with raising funds for building materials, we wish to involve clergy and their congregations in the actual construction of the homes through volunteering at Build Days. Learn more about organizing a Build Day.

Several members of Calgary's faith communities have participated in more than 10 Build Days on Habitat for Humanity sites in Bowness and Pineridge. Some of these groups include:

This effort is empowered by the Clergy Leadership Team composed of various faith leaders in the Jewish, Christian and Muslim communities. We anticipate other faith groups will be joining us in the near future.

"The Habitat for Humanity Interfaith Build Project represents how I can fulfill the Jewish mandate of 'Tikun Olam - repairing our broken world' by bringing wholeness to families in need of affordable housing."

Other participating clergy include: