23 cyclists embark on 375 kilometre Ride through the Rockies to raise $125,000 for Habitat for Humanity homes in Calgary 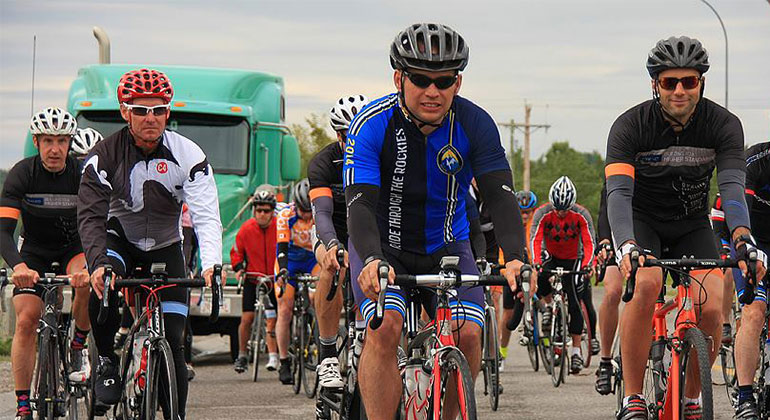 CALGARY, AB, August 18, 2016 – This morning, 23 cyclists embarked on the first leg of a four day, 375 kilometre journey through the Rocky Mountains as participants of the third annual Ride through the Rockies. Each cyclist pledged to raise at least $5,000, with the collective goal of raising $125,000 for Habitat for Humanity. The Ride is sponsored by Star Building Materials to help Habitat build strength, stability and independence for local families through affordable home ownership.

“The comradery and friendships that I have developed through this ride continue to inspire me every day,” said Ken Crockett, Vice President of Star Building Materials. “I know that the difference that we can make through our fundraising efforts will last a lifetime for the families of Habitat for Humanity.”

The funds raised by the cyclists will go directly toward Habitat’s development of 24 affordable homes in the Calgary community of Pineridge. The development began in the fall of 2015 and the first two four-plexes are slated for completion by November, which means eight local families will be spending the holiday season a home of their very own for the very first time.

“We’re grateful to Star and each of these cyclists for their efforts and enthusiasm,” said Carla Gervais, Fund Development Director for Habitat for Humanity. “The funds they’ve raised will play significant role in giving local families the opportunity to build strength and stability through home ownership, and we’re tremendously thankful for the support.”

Affordable home ownership builds long-term stability and self-reliance, empowering families to invest in their futures and creating lasting benefits for their children. In the Habitat model, families work to build their homes alongside Habitat, and then purchase these homes with affordable mortgage through Habitat, so that they have the stability and financial flexibility to make forward-looking choices.